Jewel has finally got their act (or should i say ‘Acts’) together.

This nightclub in Manchester (Canal St. is off of Granite St.) New Hampshire is under new ownership, has new sound, new policies, new look and and new vibe (GREAT) altogether. 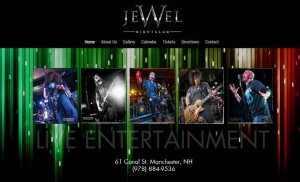 After attending a few of the national acts that have come through (Buckcherry, Puddle of Mudd) I have to say this is the best sounding club I have ever been in. The staff was friendly and the atmosphere is perfect for a night of live music.  Manchester has needed an intimate venue like this for a long time. Don’t get me wrong…I loved the intimacy of Mad Bob’s, but it was REALLY small.

Fear not, it does NOT replace local Manchester favorites such as Shaskeen, Strange Brew, or other smaller live music venues. Jewel ADDS another option, one that was missing, for small and large nationals to play in, where normally a fan would have to go to Portsmouth or Hampton beach to see. It basically put Manchester on the map for touring bands.

Jewel nightclub is about 400 capacity (Im guessing) and it’s a great place to see national bands in a small setting, and all the local bands that play there sound great as well.

So we have launched their website anew, in hopes to keep up with a growing fan base of rock, country and comedy fans.  Check them out at http://www.jewelnh.com.